I’ll try to keep this review short as my normal reviews, but I have to warn you, backpacks are a big deal to me so I might ramble on. I think every pup hitting the trails or road for a good run should have one. A backpack is a good place to carry your spare leash, poo bags, water, nom noms, even a GPS all for yourself, and you can help your human out with their stuff too. A backpack is a good way to burn some extra calories and build muscle during your daily routine, after all who doesn’t want a healthier body?

This backpack was my first and it was actually a hand-me-down from Big Brother Trey that was purchased approximately 5+ years ago and I haven’t seen it in the stores since. Trey put a few miles on this pack so by the time I got it, it was well broke in and starting to show. For a first backpack that will get light use I really have to say it is pretty good despite being cheap (compared to other packs). So lets start off talking about the basic build of this pack. There is nothing special to this pack, like most of the lower end packs there is 1 chest strap that goes around the front under my neck. If you look at higher end packs you will notice they now go with a Y design that connects the chest strap down to one of the girth straps to prevent rubbing at that base of neck (check Ruff Wear packs). It also has two girth straps and run under my chest. These girth straps attach to the bottom of the pack which has ups and downs to this design. The up, is that it keeps the pack from bouncing around when you are jumping around. Other packs only connect the bags to the harness from their tops so they flop loose, the reason is for dogs that might go through deep water with their pack, it allows them both to float up (assuming the load floats) making it easier to swim. I have seen some packs give you the option by only connecting the top, but then having loops at the bottom of the packs that you run the girth straps through if you want the load secured down. Each pack is only 1 big compartment that is closed with a zipper, the compartment is big, however I would not load it down with weight. The height and width of the compartments are decent but depth wise it is pretty deep which I think the fault. If you load to much weight the pack sags down and will still bounce the load around which will not make for a good packing experience.

Now to the material, the part of the pack that touches my back is mesh and the rest of the pack feels like a very light weight neoprene. The soft mesh makes up the part of the pack that goes over my back connecting the packs and makes up the back sides of the packs. This mesh makes the pack nice and comfortable to wear, it conforms nicely to my figure, it’s soft and VERY breathable. The down side of this mesh is that is snags and will pick up loose materials it brushes up against (think running through tall grass or bushes). The outside of the packs are made of this neoprene type material that is also nice and soft but doesn’t pick up material like the mesh. This neoprene also gives it the appearance of being water resistant but just remember the part of the pack against my back is mesh, so it’s not. The straps are made of the typical nylon, however each strap has a some of the neoprene that wraps around it and secures with Velcro so the neoprene should stay between my skin and the nylon straps/buckles however those straps don’t stay in place (look at pic with of Trey wearing it). This brings me to the buckles, CHEAP, yeah so far my review has been fair, but the buckles are a big disappointment. By the time I got the pack one was already broken and not long after a second one also broke.

I now have two other backpacks I will talk about in the future, lets just say I have been working my way up learning what works for me. This one now just sits in my toy box for spare parts and possible use in a future costume.

Pros:
Cheap
Great for training if you are worried about a good pack getting destroyed

Cons:
Cheap
Buckles really cheap
Wouldn’t carry to much weight
The neoprene wrap that should protect you from rubbing against the nylon doesn’t stay in place

Price:
No one remembers the price and it is no longer available new.

Recommend:
Only as a training pack or if you are only looking to carry a leash and doggie bags, it is not something I would trust with weight. So if you can pick a used one up for a couple dollars it would make a great trainer if you pack is with light weight stuff, like towels or even shipping/packing material just to fill it out. 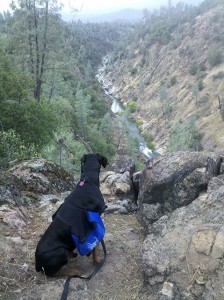 Trey in the Dickens Backpack 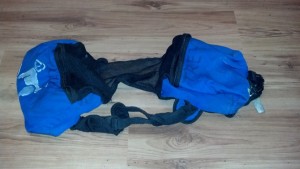 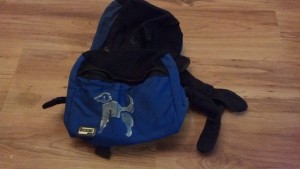 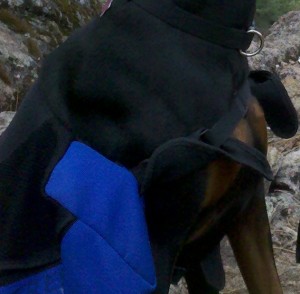 Dickens Closet Backpack, notice the wraps that are supposed to keep the nylon strap from rubbing doesn’t stay in place.