I have to admit this toy has been in our toy box since before I was born. Mom bought this toy for Trey years ago but before I came along, Trey preferred to love on soft plush toys so it got very little play. Going back through my puppy pictures I found a few with this toy. I think Mom hid this away when I got bigger because she was afraid it wouldn’t last with my reputation for toys (with good reason bawhahah). However since we barked about doing a Kong series Mom decided to pull it out of the toy box and let me have it.

After a bit of play here are my thoughts, although it looks like a tennis ball it is a bit more durable with thicker walls than a standard tennis ball. It has the nice fuzzy soft feel of a tennis ball and it is nice to hold. Being long you can hold it in the middle and still have enough out the side of your mouth to waive it in front of your brother/sister but still play keep away. Surprisingly the squeaker does seem to be holding out (normally first to go on my toys) but I think it is because I haven’t narrowed down the location of the air hole so I haven’t stuck my tooth in there yet to pop in/out the squeaker.

Pros:
Like a tennis ball but tougher
durable squeaker

Cons:
Not really for “chewers”

Recommend:
Yes for those who just play hard with their toys, No for actual destructor-chewers 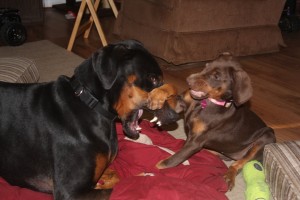 Protecting My Airdog Squeaker Stick from Trey back when I was a little pup with big attitude!